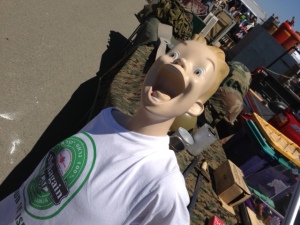 I’ve been reading about the first-Sunday-of-the-month Alameda Point Antiques Faire ever since we moved here in September.  After a couple of failed attempts – holidays, confusion with the Alameda Flea Market, and a rain-out – I finally made it there today, along with what looked like at least a couple of thousand other cars.  Whoa.  I had no idea it was so huge

If you’re looking for anything from used furniture, to kitsch, to collectibles, this is the place to be.  According to the Faire’s website, roughly 800 vendors set up shop on the old runways of what was once the Alameda Naval Base at the west end of the island of Alameda.

Unless you’re planning on giving over a day, it’s impossible to see everything – the place goes on forever, with the gorgeous San Francisco skyline in the background. We opted for a one-aisle strategy, walked the length of it, trying to keep our detours to the meaningful, then walked back along another aisle.

Fortunately for us, we found the food aisle in our perambulations.  There were plenty of delicious options – Lockeford sausages, handmade donuts, tacos, gyros, kettlekorn,  deli sandwiches, and a delectable home-made popsicle vendor from whom we bought a confection called “Night Time in Bangkok” which I can’t even begin to describe.

The parking is free but there is an entrance fee ($15 for all day but only $5 per person if you arrive between 9:00 am and 3:00 pm). They also offer free flat card usage to haul your purchases from the faire to your parked car.

We recently moved to Alameda, California where we are now settling in and learning about the history of our new home.  The town of Alameda is actually an island, just east of San Francisco, nestled next to Oakland in the San Francisco Bay.  One of the more fascinating aspects of our island’s history is an area on the west end called Alameda Point – a 918 acre site which, for 57 years, a humming Naval base.

But the story of Alameda Point begins earlier.  Athough an island now, Alameda was once on a peninsula. In the early 1900’s an estuary was dredged through and the peninsula of Alameda became the island of Alameda. The industries that sprouted up on the island – a borax company, coal-to-gas plants, and an oil refinery – added contaminates to the excavated dredge material which was mostly dumped on the western side of the island.

In 1936 the Navy purchased that western landfill from the City of Alameda and commissioned a Naval Air Station there in 1940. Over time, further tidelands and sloughs were filled and the Air Station’s acreage grew. By the time World War II was underway, there was a combined military and civilian force on the base of 18,000 people, as well as many local civilians employed there.  The station included two runways, two helicopter pads, a control tower, airplane hangars, seaplane hangars, an aircraft carrier berthing pier, as well as acres and acres of very large service buildings and storage facilities. Aircraft were manufactured and repaired on the base and training programs for radar operators took place here. Nuclear powered aircraft carriers were home-ported at Alameda into the 1990s. Here is an aerial map with clickable information, to give you a feel for the place.

The Pan Am China Clipper hangar.

Pan American World Airways used the Alameda yacht harbor as the California terminal for China Clipper trans-Pacific flights beginning in 1935.  The China Clipper terminal is still there at Alameda Point, and is designated a California Historical Landmark. There are two museums on the Point – the Alameda Naval Air Museum and the decommissioned aircraft carrier, the USS Hornet.  The Hornet was an active participant in WWII and the Vietnam War and acted as the recovery ship for NASA’s Apollo 11 and 12.  You can tour the ship and see the collection of fighters and helicopters on deck, as well as the museum inside.

The Navy closed the base on April 25, 1997.  The City of Alameda purchased the land in 2000 and its been in a sort of developmental limbo ever since.  In 1999, NAS Alameda was listed as a Superfund cleanup site with 25 locations on the base identified as needing remediation (mostly for PCB contamination).

The buildings are still there and anyone can go out to visit.  There is a real ghost town feeling to it, as you can see in the photos below. Boarded up windows, peeling paint, weeds sprouting, and concrete crumbling.  But there is also a military neatness to it all, not to mention a remnant sense of the humming, thriving work that went on here not so long ago.  As I ride through on my bike, I feel like if I listened closely enough, I could hear the grind of engines and the hum of workers toiling away inside the immense hangers.

I don’t know what it is that fascinates me about the place – but it does.  Maybe it’s the sheer scale of it – a testimony to the power of human endeavor and engineering?  Or maybe it’s the fact that it’s abandoned – it reminds me of one of those Twilight Zone episodes when the hero comes up on a deserted setting, with everything left in place, as if all the occupants were suddenly vaporized, leaving behind their half-finished cups of coffee and their still smoldering cigarettes?  Or maybe it’s a bit of wabi sabi – the Japanese aesthetic over the beauty in ruin and rust?

The Pan Am China Clipper hangar.