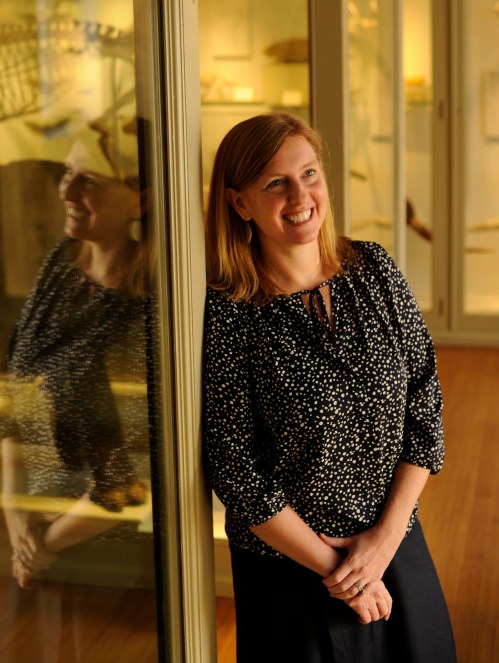 This last weekend marked the 10th anniversary of the Biology Leadership Conference.  One hundred and two biology educators gathered from all over the U.S., Canada (plus one attendee from Bangladesh!) for the three-day meeting in Tucson, Arizona.  The conference keynote address was given by Hopi Hoekstra, Professor of Zoology and Curator of Mammals at Harvard University. Dr. Hoekstra’s lab studies evolutionary genetics, examining the genetic basis of fitness-related traits and what can genes tell us about the evolutionary process.

She started her talk with one of those amazing connection stories about Charles Darwin. Her story connected Walter Drawbridge Crick (grandfather of Francis Crick), a shoemaker (and amateur naturalist) who, many years ago, sent Darwin a sample of a cockle, clamped to the leg of a terrestrial beetle, which led to an article that Darwin published in Nature over 100 years ago.  A lovely story to demonstrate remarkable connections, overlaid on the shared evolutionary history of all organisms.

The Hoekstra lab studies different populations of wild mice (genus Peromyscus, commonly known as deer mice) to uncover the genetic and developmental mechanisms underlying variation in cryptic coloration patterns and behavior.  Though these mice superficially resemble the common house mouse, Peromyscus have larger eyes and often have two-tone coloring with a darker dorsal color and a lighter belly color.

Wild mice are the most abundant mammals in North American.  Since they are found in every habitat type, there are many local adaptation to investigate.  Not only that, since these mice have been studied for so long by natural historians, there is a tremendous body of work documenting their behavior, physiology and morphology.  As a result, these ping-pong ball-sized  mice are turning out to be a vital, emerging model system for the study of evolution and genetics.  In fact, Hoekstra explains that she thinks of mice as the Drosophila of North American mammology.

The fascinating thing about Dr. Hoekstra’s research is that it is always a three-part story: environment, phenotype, and genotype.  It’s inspiring to hear her describe the way researchers in her lab shift effortlessly from hardcore, basic field work to high-tech, molecular techniques and methods in the lab.

First up in her talk was a description of their work on color variation between organisms and within an organism.  As we know, color is involved in a number of important biological processes (warning, mate choice, mimicry, and crypsis).  The variation in pigment pattern of deer mice gives the Hoekstra lab an ideal opportunity to examine natural variation and how patterns are formed.

Peromyscus polionotus (commonly known as the oldfield mouse) naturally occurs in old, overgrown agricultural fields.  These mice have recently invaded new territory in the white sandy beaches on the gulf coast of Florida, the Santa Rosa Islands.  The Santa Rosa Island field mouse (or beach mice) are a sub species of the oldfield mouse, differing in their pigmentation and patterning.  The oldfield mouse has a dark brown coat, light grey belly, and a stripped tail while the beach mice lacks pigment on its nose, its sides and its tail.  Since geologists know that these sandy islands are only 6,000 years old, the researchers can deduce that the evolutionary patterns in these populations are relatively recent. It makes sense if you are a mouse, running around on very light-colored sand, that it would be an advantage to blend in with a light-colored coat. But of course, Hoekstra and her team wanted to prove this.

Their plan was to examine the pattern by tagging 100 light mice and 1oo dark mice and then releasing them to see who survives. It turns out that’s really hard to do. So, instead, they made 1000’s of plasticine models of mice. Half the “fake” mice were brown, half were light-colored. They put them out in the environment in equal frequencies and observed what happened. Using mice models, instead of real mice, gave the researchers an added advantage – they were able to cut out any natural variation (odor, behavior, activity patterns) that might confound the experiment.  Their results showed clearly that the a mismatched mouse (light mouse on dark soil or dark mouse on light sand) had higher levels of predation from owls, hawks, and their other natural predators.  In other words, there was a strong selection against conspicuous mice. 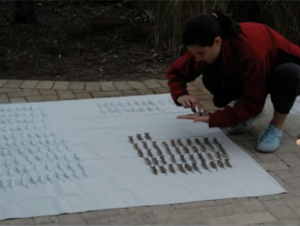 From this field work, they could conclude that natural selection is certainly a driver in this color variation.  While many researchers may stop there, Hoekstra’s lab pushes further to take their questions to the lab to investigate the genetics – and thus the mechanisms.  They brought the dark and light mice back to the lab, made crosses, intercross hybrids, and then took a look at the genetics of the 2nd generation.  They use QTL mapping approaches to identify genomic regions involved with coloration, ultimately hoping to find the causal gene. By examining the 2nd generation offspring, they can see that dominate and recessive alleles contribute to the pigment pattern.  They reason that it’s not a single, simple gene at work – since there is continuous variation –  but they can also see that it’s not 100’s of genes.  Based on the nature of the variation in the hybrid generations, they predicted there are most likely 3-5 genes involved.

By mapping the genotype of the F2s against their phenotype variations, they pinpointed the Mc1r gene (Hopi explains that they refer to Mc1r as the “dream gene”).  They found a mutation in that gene that causes a change in receptor function.  That receptor function change impacts melanocytes that produce pigment (Mc1r is basically the switch that determines what type of melanin is produced resulting in either light or dark coloration).  And with that discovery, the Hoekstra lab found a connection between a single nucleotide change and survival in the wild.

But they didn’t stop there.  They pinpointed two additional gene loci – Agouti and Corin.  But in the case of these two genes, it isn’t a matter of simple coding mutations. Here, its likely regulatory mutations, resulting in increased expression.  So the precise mechanism here is much harder to track down – we’ll have to stay tuned for those results.  But, ultimately, pigmentation in these mice is controlled by these three interacting genes.

The Hoekstra lab also examines patterning difference between dorsal and ventral pigmentation in mice.  The pigment differences are expressed in the dermal cells and dermal papilla.  The mainland mouse has a dark brown coat and a grey belly.  The beach mouse has an upward shift in the boundary between dark and light and their flanks and belly are completely white. Suspecting that Agouti expression is important is determining this dorso-ventral boundary, they tried knocking out Agouti as well as increasing its expression to test the correlation.  Through this work, they determined that over-expression of Agouti in mainland mouse, delays the maturation of melanocytes resulting in changes in pigmentation.

Remvoing the foam cast of a burrow.

Shifting gears from a color differences to a behavioral difference among the wild mice, the Hoekstra lab examines burrowing; looking for the genetic basis of burrow shape. Different species of Peromyscus build dramatically different burrows in the wild and, of course, burrow shape and structure is important for reproduction and survival. Turns out, the burrows of oldfield mice are larger and more complex than the burrows of the deer mouse. The oldfield mouse digs a second “escape tunnel” that radiates up from the nest to just below the surface (which is a good assist when snakes are your predators).  Hoekstra’s team examines the structure of the burrow by, first chasing the residents out of the burrow by blowing air into the tunnel (and catching them). Once the mouse is captured, they inject plastic foam (which she hilariously calls “”pheno-foam”), which hardens in the perfect cast of the burrow.  The cast is treated as a morphological artifact of the underlying behavior. A perfect example of Richard Dawkins’ “extended phenotype”. Using the same lab methods described for the pigmentation experiments, her lab has now identified four genetic regions that contribute to the genetic basis of burrow shape.

To further examine burrowing behavior in their subjects, they’ve created a special “burrow box”  (which she referes to as a “Pheno-dome”) with transparent walls that allows them to watch (and record) the mice digging a burrow.  Since they’ve found it takes a given mouse roughly 16 hours to dig a burrow, they’ve now pioneered a way to track the mouse through time on the video, in an automated fashion. It’s a sort of fast-forwarding through the footage with a colored outline to achieve an automated/enhanced behavioral analysis.  Using this method, they are able to record when, how, and how quickly the animals dig.

Hoekstra’s efforts to examine natural variation in the wild and then leverage molecular techniques and tools to reveal the genetic mechanisms behind those variations are awe inspiring. Their work spans so many domains, requiring expertise at the level of the environment, the organism, and the gene (a rare combination in these reductionist days!). What’s more, she clearly communicates their sense of fun and the burning curiosity that drives their work – the discovery of genes to tell the story of evolution.

“That perfection of structure and coadaptation which most justly excites our admiration.”  – Charles Darwin

Here are links to more information on Dr. Hoekstra’s work

Getting Your Feet Wet 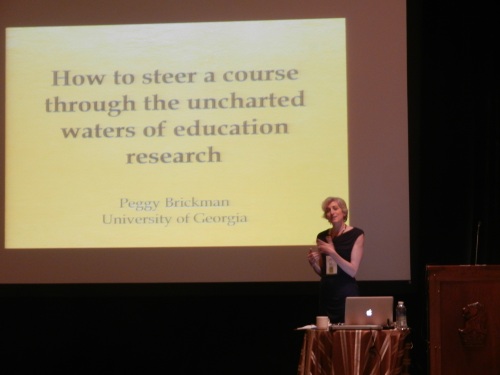 Peggy Brickman (University of Georgia) lead a terrific workshop this week at the Biology Leadership Conference (#BLC10).  The workshop focused on conducting education research, even if you’re not an education researcher.  She gave a useful summary of the characteristics of good research questions:

To companion those, Peggy outlined the most common mistakes people make in formulating their research questions.  Here are common problems that reduce a research question’s interest to others (and to publications):

Filed under Reflections on Teaching